Helen is author of ‘Backstreets of Purgatory’ which she describes,

The Backstreets of Purgatory is a novel which tells the story of the chaos the kicks off when Caravaggio turns up in present day Glasgow to serve out a stint of his purgatorial sentence as mentor to struggling art student Finn Garvie. Art, different versions of sanity, and….Irn Bru.

The book is currently gaining funding through Unbound, a new take on publishing new and upcoming authors, it focuses on its own version of crowdfunding allowing supporters to fund the author and once the target has been achieved they receive acknowledgement in the name of things such as special edition copies of that book. It’s a refreshing idea and I asked Helen if she could tell us a bit more about it..

Several things attracted me to Unbound. Their reader-centred ethos for a start. They have a strong belief that readers are much more adventurous than most of the marketing departments of the major publishing houses apparently consider them to be (if the glut of ‘copycat’ titles are a measure).

With publishing changing so rapidly and prices being driven down by the likes of Amazon, traditional publishers are becoming more wary of taking risks on new or less established writers, or on unusual or challenging books that fall outside well-defined genres.

Disruptive publishing in whatever its form (self-publishing, crowdfunding, Unbound) seems to me like the best way to challenge this state of affairs. Yes, it is harder to make a living as a writer and there is almost no such thing as advances for the majority of writers these days, but on the positive side, there are amazing opportunities to reach your audience.

As an Unbound writer, I can take advantage of technology to link up with readers and supporters during my project in a way that would previously have been impossible. Supporters can track progress, follow my blog posts, ask me questions directly. As a reader and a writer, I love that close contact. 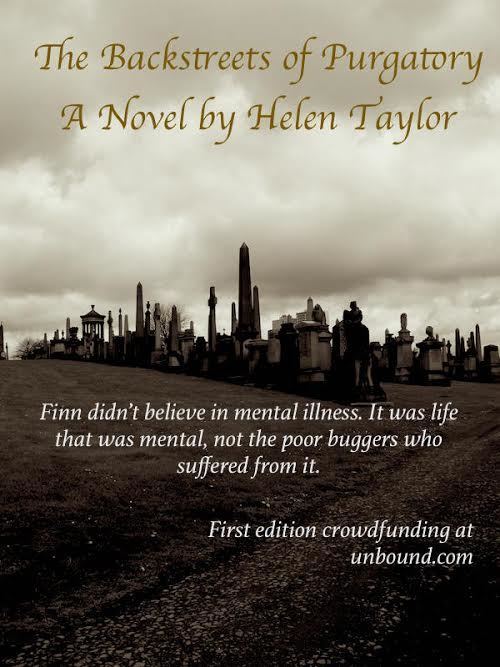 Helen’s background is incredibly varied and interesting in itself. A former doctor and research scientist Helen studied and worked in Glasgow then Oxford and London before then returning to our weegie city.

A huge change in my life circumstances took me to France where I started writing seriously. To get my science brain into creative mode, I took an introductory online course with the Open College of Arts. I was lucky. I had a really encouraging tutor. I am sure I would have carried on writing regardless but it was great to have some external validation. From there, I went on to do Diploma of Creative Writing with the Open University, and finally a DLMA with Lancaster University. I’ve been blessed in the most part by astonishing tutors.

Surprisingly once I got into it, I found that my science brain and my creative writing brain were not that different. Scientific research involves logical thinking and the steady, relatively mundane work of repeating experiments to make sure that the results are reliable and to improve your experimental technique, and then taking the next rational step depending on the results. But it also involves a type of left-field creative thinking, the type of thinking that makes unusual connections between very different ideas. Or the ideas that seem to spring from nowhere because your subconscious has been busy working on them without you even realising. It is then that the big leaps, the big advances come.

And writing has been exactly the same for me. Lots of practice. Lots of experimenting. The relative slog of getting words down on paper. And then those moments when it feels almost like I’m loosening a screw in my brain and letting the bizarre connections be made. Or when a brainwave comes when I’m out running or something and not consciously thinking of work. I love that.

What/Who are your influences in writing?

I’m sure my writing is influenced by some extent by whoever I’m reading at the time. Not consciously, of course, but I wonder if you look carefully at what I’ve written over the last year whether it would be possible to see where I was reading Elena Ferrante, where I was reading Denis Johnson, where I was reading Patrick Modiano. But I read lots, so maybe the individual influences are diluted or mixed. I hope I have my own style.

I’ve been lucky with some of my tutors and teachers over the years. Jean Anderson, my high school English teacher was mad at me when I went to Uni to do medicine. I wish she was still around. She’d be very happy to see that I’m writing. At Lancaster, the Irish poet (and recent novelist) Conor O’Callaghan was my tutor. He was a brilliant teacher. He understood what I was trying to do without wanting to turn it into something he would have written, wasn’t afraid to tell me when it was rubbish (which was quite frequently) and equally wasn’t afraid to tell me when it was good. Exactly the sort of mentoring that any writer needs.

‘Backstreets of Purgatory’ is set very purposefully in Glasgow, what made you chose Glasgow as your setting for the book?

Because of all the places I’ve lived it is the one I know the best and it has such a distinctive personality. Incredibly warm and friendly, but slightly unpredictable and with a definite edge.

Maybe it was one of those subconscious things but Backstreets explores the extremes that we all encounter in our lives or that make up our personalities. The light and the darkness, you could say, mirroring the extremes in Caravaggio’s paintings. For most of us, I think the extremes exist side by side within us, and I think Glasgow is like that too. In some ways I suppose it is like any big city with its good qualities and its difficulties, but perhaps Glasgow has more than its fair share of both.

I think I would have found it hard to write about the city in the way I have if I still lived here. The distance let me fictionalise it, use artistic license. If I had written it here (Glasgow) I would have been hung up on accuracy and I think I would have felt like an imposter. I’m not proper Glaswegian. Only about fifty percent. It feels like home, though. I miss it.

What would be your advice on starting out writing and getting published?

Assuming you’ve written and rewritten and rewritten, until you’ve got the work you wanted to write, the critical thing is persistence. Take the rejections, learn, pick yourself up and go again. If you believe in your project, eventually you’ll find other people that do too. I had some knock-backs from agents - some extremely positive but knock-backs nonetheless, others curt and pretty harsh - but I really believed in my book.

Take advantage of any opportunities that come your way. Practice your ‘elevator pitch’ for that moment when you bump into someone in the industry. And make your own luck. Go to conferences and book festivals. Get involved in online communities. Chat to people. Engage. 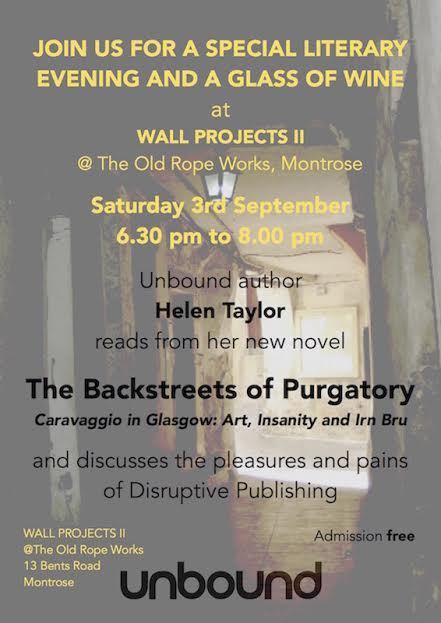 Helen will be at the Spoon Cafe, Trongate tonight. 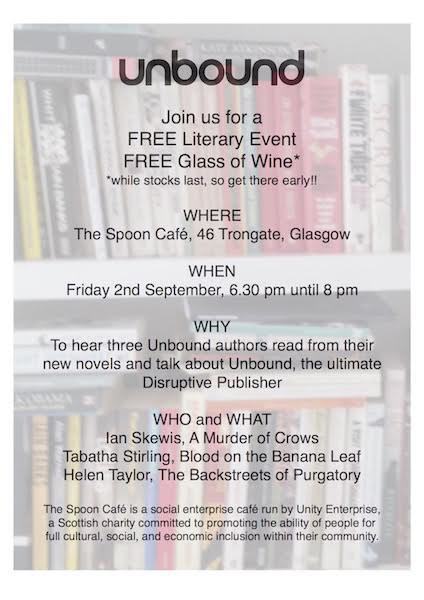 To support Helen and other Unbound authors or if you’re interested in more information please visit Unbound.com

The Lighthouse in Glasgow has opened a new exhibition that will satisfy your inner art nerd and if you, like me, are a little bit geeky and a whole lot of arty then Adventures in Space could be this summer/autumn must see exhibit. open... Continue →